From the records kept on file with the Belmont Historical Society, we know that the four young recruits mentioned in this  letter to Miss Mary Marsh were all from the newly incorporated town of Belmont and enlisted to serve in the Civil War on August 14, 1862. They were assigned to the Massachusetts 15th Infantry Regiment, Company C and are identified below: Charles V. Marsh, Joseph L. Frost, Albert C. Frost, and John H. Carpenter. 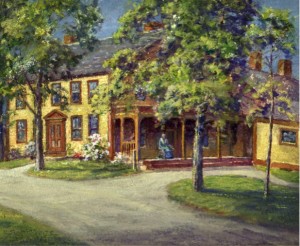 The Mansur Marsh family home in Belmont. The house, which is no longer standing, was built in 1770 and was located at 257 Prospect Street. The original painting is in the collection of the Belmont Historical Society.

Charles V. Marsh,  the  27-year-old son of Mansur and Louisa Marsh. He was described as a farmer and the son of an early town leader. Charles was wounded at Gettysburg on July 3, 1863 but returned to duty in December of that year. He ended his military service when he was reported captured in June of 1864 and taken to Andersonville Prison where he later died. 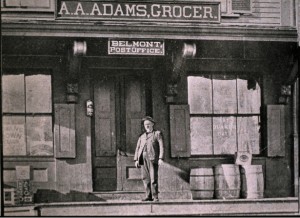 After returning from the Civil War, Joseph Frost worked in A. A. Adams’ grocery store in Belmont. That building, which was built in 1852, is no longer standing.

Joseph L. Frost, the 21-year-old son of Thaddeus and Abigail Frost of 291 Brighton Street. Joseph was wounded in the battle of Gettysburg on July 3, 1863. He ended his military service on July 28, 1864 after having fulfilled his term of service. In the 1880 census, Joseph Frost is listed as living with A. A. Adams and working as a clerk in his grocery store on Concord Avenue. 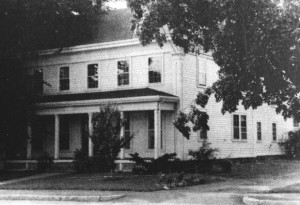 Albert Frost grew up in this house at 307 Pleasant Street in Belmont. The house has been beautifully preserved and restored .

Albert C. Frost, the 18-year-old son of Henry and Miranda Frost of 307 Pleasant Street. Albert was shot and wounded in the leg at the battle of Gettysburg on July 3 1863 and later died on September 16, 1863 in the hospital located in Adams County Pennsylvania from an infection following the amputation of his leg. 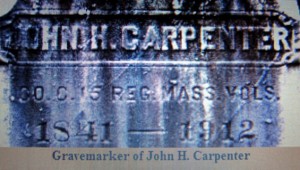 The marker of the grave of John Carpenter of Belmont. After the Civil War, he married and moved to Fitchburg.

John H. Carpenter, the 21-year-old who was living with the Clark-Newell family of Belmont. John was wounded in his shoulder at the battle of Antietam on September  17, 1862 and wounded again in his shoulder and side at the battle of Gettysburg on July 3, 1863, He ended his active military service on March 25, 1864 by a transfer to the Veteran Reserve Corp. After the war he married Helen Houghton who lived only a short time. He next married Rebecca Clark with whom he had two sons. The family eventually moved to Fitchburg.

Back to Charles Marsh’s letter