After the Confederate attack on Fort Sumter in April of 1861, the Union found itself with only a small standing army whereas the Confederate states had already formed a substantial fighting force. President Lincoln quickly put out a call to the northern states to muster an initial 75,000 men for what was expected at that time to be a quick decisive war. Individuals were encouraged to raise groups of volunteers, and state and local governments offered cash bounties to encourage young men to sign up. The new town of Belmont was no exception, and records indicate that the own paid over $17,000 in bounties. This additional sum (usually about $125.00 per man) was given as a bonus to those who volunteered in addition to their regular military pay. Conscription was soon put into practice to deal with any shortage of volunteers. Every man between the age of 16 and 55 was required to register for the draft, and those who were not able or did not wish to fight were allowed to hire a substitute. 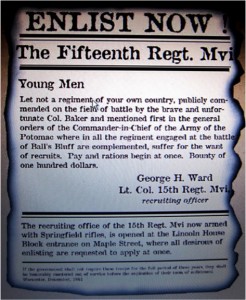 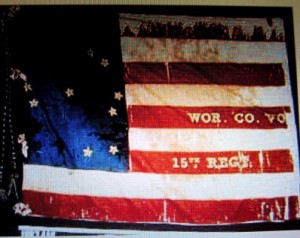 Some of the unit flags of the 15th Massachusetts Regiment are preserved to this day. The “Worcester Flag” was presented by the ladies of Worcester and measures 5 feet 9 inches by 6 feet. The stars and lettering were painted in gold and the cords and tassels were white with blue. The stars were arranged in a concentric circular pattern and tipped at random angles. 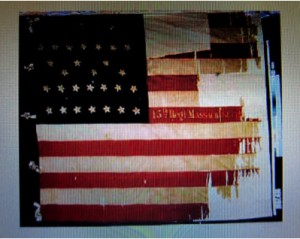 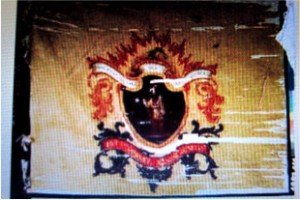 The “State Shield Flag” was white with the state shield centered upon it. It was approximately 3 feet 6 inches by 4 feet 6 inches and had a red ribbon below the shield that said “15th Regiment Massachusetts”.

The 15th Massachusetts’ colors were captured by a member of the 3rd Georgia Regiment on June 22, 1864 at Petersburg, Virginia during a flank attack by General Mahone. The War Department recorded this capture as number 91 on its list of captured Union Flags. After the war they were stored in the War Department until 1894 when they were finally returned to Massachusetts and put on display in the State House.

“The Old Flag the stars and stripes which were presented to the Fifteenth Regiment by the ladies of Worcester and which have been through so many battles and never been disgraced, have been sent at the request of the authorities to Boston. The flags are a curiosity to behold; still one cannot look upon them without a feeling of pride mingled with sadness, proud of the honorable position they have always taken in every battle; sad to think the many brave and noble dead that have fallen beneath them.”

Back to Charles Marsh’s letter