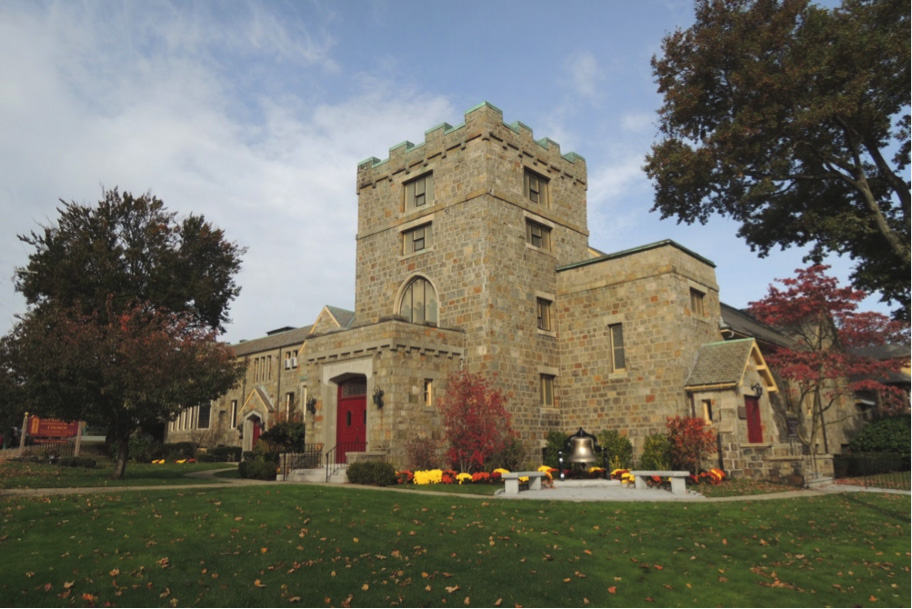 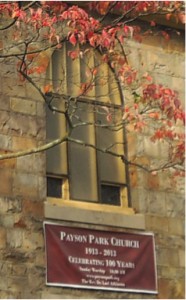 The official founding of the Payson Park Church took place on Sunday June 3, 1913 when 72 charter members gathered for the first service acknowledged by the Ecclesiastical Council. Located at the corner of Payson Road and Belmont Street, the 100 year old church remains an active part of the community today. The church’s Centennial Celebration on Sunday, November 3, 2013 included a worship service followed by a luncheon and brought together both current and former members who came to extend their best wishes and to offer their support of the many programs they would like to see continue throughout this century. 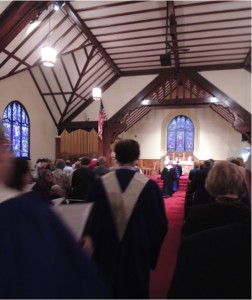 At the start of the Centennial Celebration Worship Service on November 3rd, the Clergy were followed into the sanctuary by the Choir while members and friends join in the singing of the opening hymn. The service included remarks from regular clergy and special guest ministers who led the congregation in celebratory prayers, sacraments, and scripture readings. 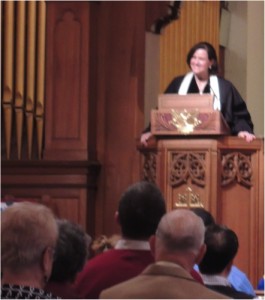 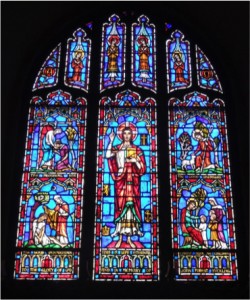 The Reverend Dr. Lael Atkinson took her message from the large stained glass window which was installed in the Chancel. This window as well as two other large memorial windows were all designed by Joseph G. Reynolds who was a long-time parishioner.

The church musical program has always played an important role in the worship services of Payson Park. From a firsthand account of the early church written by Mildred Lewis, we learn that…”the music for our early services emanated from a little room in the front left corner. It was open toward the Chancel and toward the congregation and had a low ceiling. A railing and steps separated it from the Chancel platform. Here my mother played the reed organ and the quartets sang”. Today’s combined choir who were seated on both sides of the platform gathered together to present an arrangement during the service. The choir was joined by choral groups from The Jameson Singers and A New Song who regularly rehearse at this church. 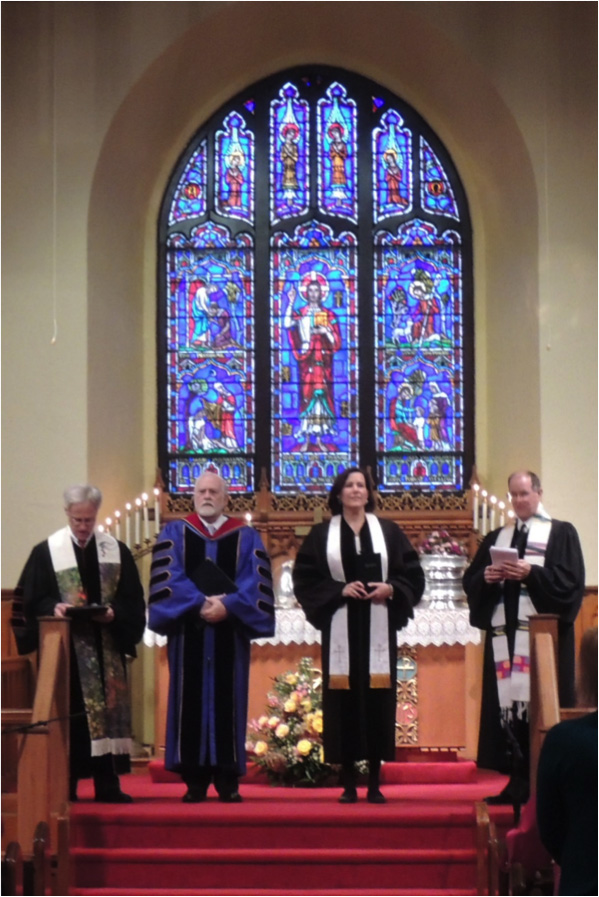 Pictured above from left to right are Reverend Dr. Jim Antal, President of the Massachusetts Conference of the United Church of Christ; Reverend Dr. Nick Carter who is President of Andover Newton Theological School; Reverend Dr. Lael Atkinson, Pastor of Payson Park Congregational Church; and Reverend Bill Ragan, Ministerial Associate at the Payson Park Congregational Church. The Clergy who participated in the Centennial Celebration Service stand facing the congregation during the closing hymn “Forward Through the Ages”.

Senior Deacon Nancy Fergus is seen here as she reads the names of the ministers of the first 100 years “who were formally called by this congregation and who fulfilled their service with integrity, love and faithfulness”. 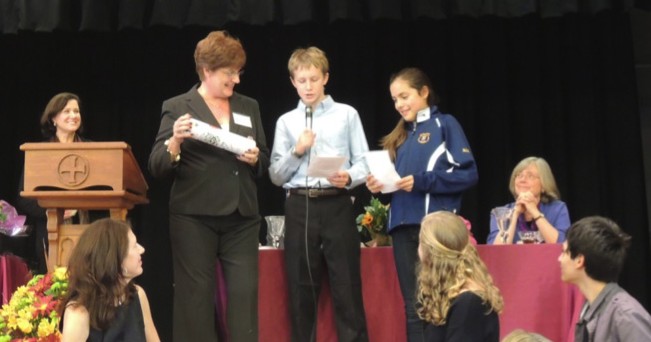 Representing the Students of God’s Garden and the Youth Group, these younger members of the Payson Park Church present a Time Capsule to mark the Centennial milestone near the close of the afternoon program.

The children also prepared a poster inviting everyone to join them in another 50 years in 2063 which read “CU at Payson Park 150th Birthday”. 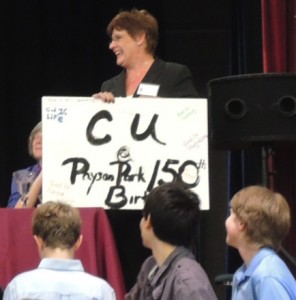 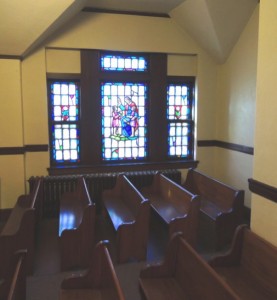 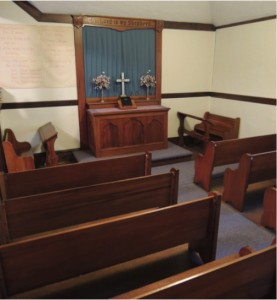 The children of Payson Park Church enjoy their own unique chapel in the upstairs corner. In the 1940’s a long-range improvement fund was established and in 1943 a worship center for young children was built in the Parish House. Later the Mothers Club gifted and installed a stained glass window in the space. According to the Golden Anniversary booklet, this “little church upstairs” was named the Mabry Chapel because of the loving work of Willis Mabry, a senior deacon, in its construction. Today the chapel remains an example of the many gifts that have beautified the building and grounds and brought a fuller meaning to the sacraments and services. 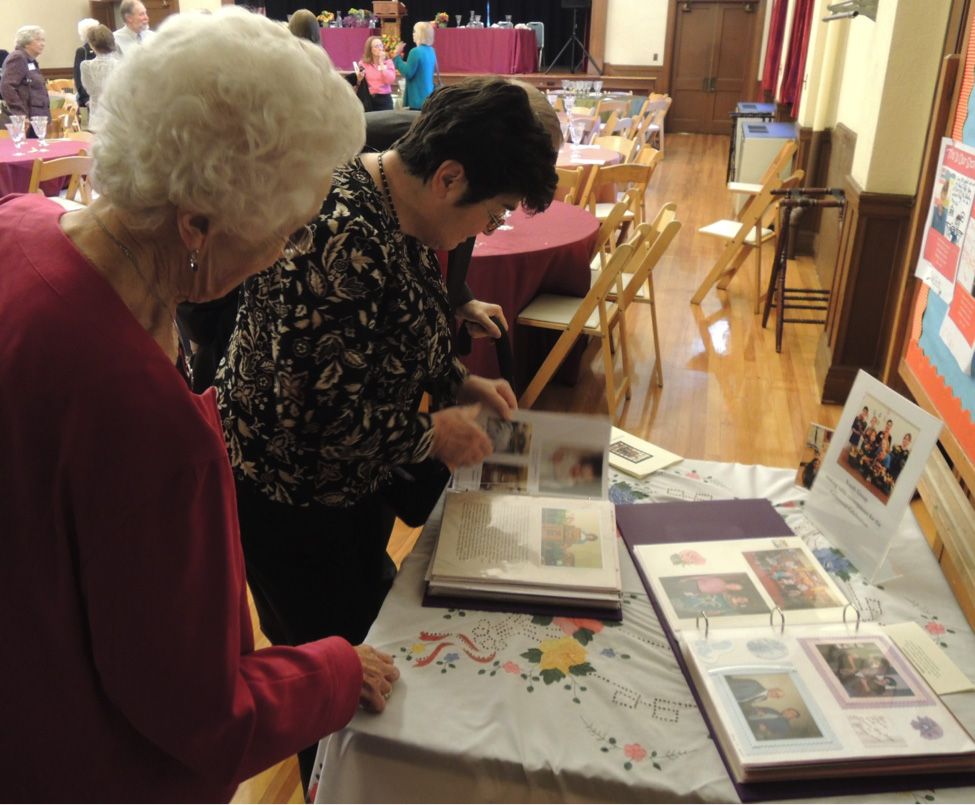 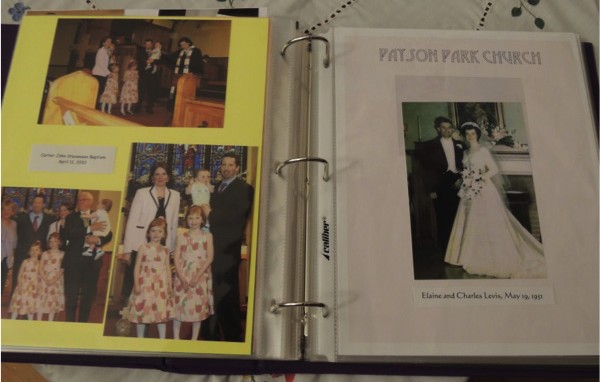 On display in the back corner of the church hall during the Centennial Celebration were Memory Books. In recognition of the 100th birthday, members of the Payson Park Church were encouraged to submit cards, photos, and letters to highlight their personal connections to this community of faith. The offerings were assembled into Memory Books which were enjoyed  by guests like Elaine McKenney Levis (in the foreground above). This long-time Belmont resident has been an active church member for 78 years and pauses to view her page which included pictures of her wedding to Charles Levis on May 19, 1951. Each page highlights significant church-related events that mark occasions that were building blocks for this caring church community. In the picture to the right, the left-hand page shows an infant baptism in 2010, and the opposite page shows the newlyweds at the McKenney-Levis Wedding. 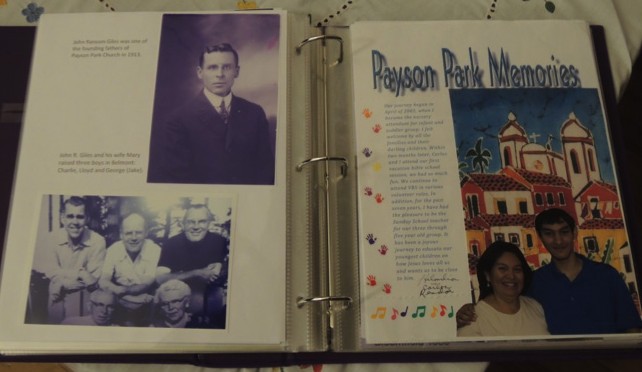 In the picture to the left, the left-hand page contains a historic photograph of John Ranson Giles, one of the founding fathers of the church from 1913, and a later family photograph shows him and his wife with their three adult sons who grew up in Belmont.

On the opposite page are greetings from a couple whose “joyous journey” began in 2005 while becoming involved with Vacation Bible School and went on to teach Sunday School for children ages 3 through 5. 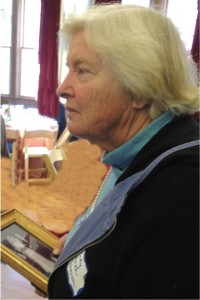 Betty Allen Johnson (shown at right) traveled from New Hampshire with her daughters to attend the special Centennial Celebration and is seen here holding her wedding photo. After the luncheon she was reunited with several friends who remember her receiving line filling the parlor. Betty was the daughter of Earle Allen and granddaughter of Alonzo Allen who were charter members of the church and active in building the original stone structure and helping with several later additions.

Longtime member of the Payson Park Congregational Church Irene Richard who has passed her own centennial milestone at 100+ years of age was not able to attend the special event in person but continues to maintain her membership in this covenant community through pastoral visits and church outreach. Another 100-year-old longtime member Willa Wye Rockett passed away shortly after the church’s centennial celebration. 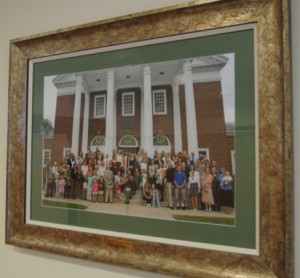 Carl Miller came to the church after the events of September 11, 2001. Like so many others at that time he was struggling to make sense of the tragedy. A long time employee of the former Fernald State School, Carl, who is also a war veteran, found comfort to ease the immediate grief and shock and eventually experienced healing from post-traumatic stress syndrome which had kept him from reaching out to others for help. Carl, who is now an active member of the Payson Park Congregational Church, expressed his thoughts during the Centennial Celebration this way: “You can’t help but feel the love in this building”. Recently when he missed a Sunday service while recovering from pneumonia, he received calls from fellow church members check in on him and then meals they had prepared which began to be delivered to his door to assist him in his recovery. Mr. Miller began attending here in Belmont as part of a merger that took place several years ago with the Phillip’s Church in Watertown. Former members of that congregation are pictured here on the front steps of their church in October 2007. The formal consolidation is what brought the two groups together but it didn’t take long before these friends became part of the family. 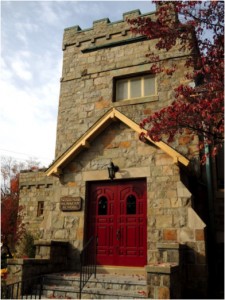 Pam Curtis first came to Payson Park Church because her grandchildren were enrolled in the Nursery School. Throughout the years the church has placed an important emphasis on education. The youth have enjoyed well-rounded activities that have included memory work, organized pageants and arranged parties. Pam also enjoyed listening to the Church choir which included her daughter-in-law. 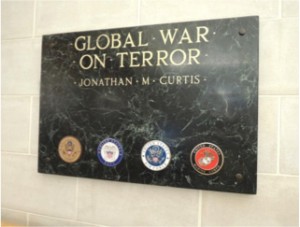 The music program is another aspect of the church that has continued throughout the past 100 years to become a much-enjoyed tradition. It was after the untimely death of her son Jonathan Curtis who was killed in Iraq that Pam was surrounded by the comfort that this loving body offered. Members of the Payson Park Congregational Church reached out in remarkable ways helping her to get through the ordeal by offering support at the time of crisis. She now attends more regularly and considers the nearby neighborhood church her home. 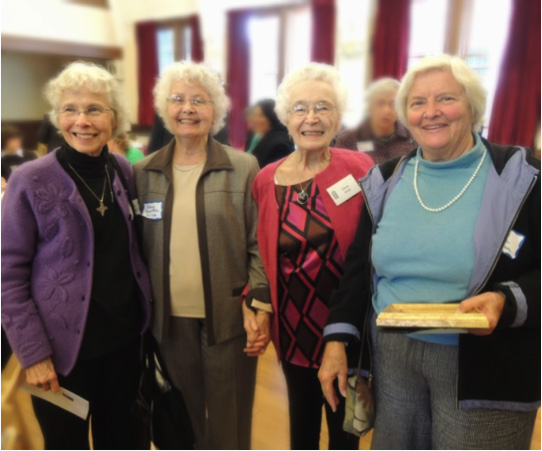 Pictured here from left to right are Ruth Coombs Henry, Nancy Knowlton Pascoe, Elaine McKenney Levis, and Betty Allen Johnson. These ladies who grew up as part of the Payson Park family but had not been together for decades enjoyed the opportunity to share memories of those early years. Ruth Coombs Henry remembered she was baptized by the first minister, the Reverend William Macnair, who was called to serve during the early services held in the Benton Chapel in 1913. Elaine McKenney Levis, a longtime Belmont resident, continues her active church membership which she has held for 78 years and attended the Centennial Service and celebratory luncheon with her two adult sons. Betty Allen Johnson was accompanied by her daughters who drove her down from New Hampshire so she could participate in the event. It was Betty’s unmarried aunt Evelyn Allen who for many years was connected with the Sunday School program. We read in the Golden Anniversary Booklet from 1963 that in the first decade the church grew from 35 children to 450 pupils and teachers in five well-organized departments. Miss Allen was Superintendent of the primary school and it is recorded that she took a personal interest in each child and served with great fidelity the cause of Christian education until she finally retired in 1960. 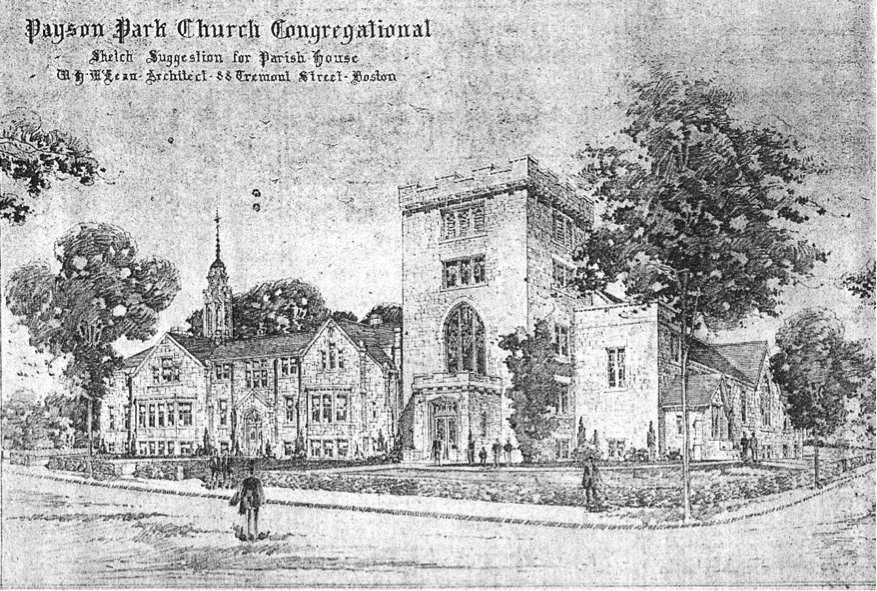 The final paragraph in the Twenty-Fifth Anniversary booklet sums things up this way: “The church now has a splendid plant, probably sufficient for years to come. If its present and future members are inspired by the same spirit of devotion to God and His service as has been shown by the founders, they cannot but do mighty things.” 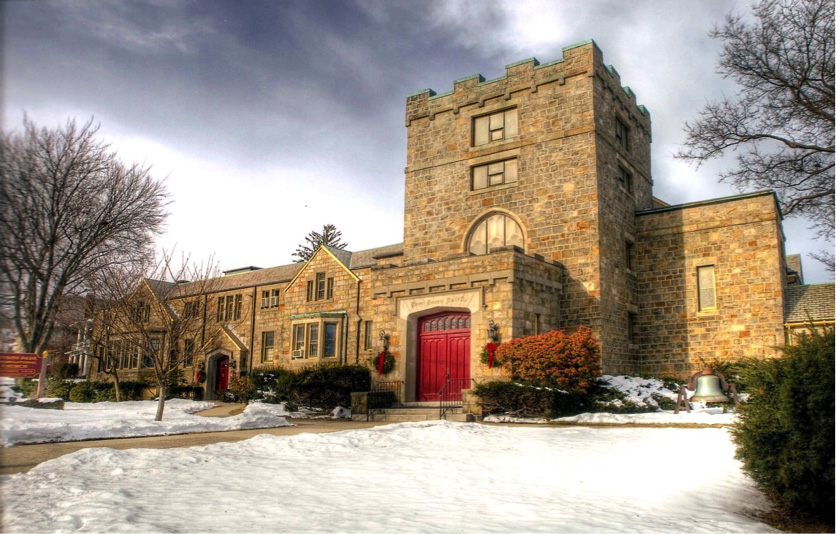