Belmont And The Civil War
Looking Back 150 Years

By the mid-1850’s our country was becoming more and more divided over the question of slavery. Owners of large plantations in the south were dependent on the practice while in the north the growing moral outrage about the treatment of human beings as property divided opinions. With the steady increase in population and economic progress taking place in the country’s northern regions, southern leaders began to fear that their rights to own slaves would be further challenged, and many states quickly began to form volunteer militias. By the time Abraham Lincoln was elected President in 1860, the state of Virginia alone had organized five regiments and six battalions. In December of that year South Carolina voted to succeed from the Union. Florida, Mississippi, Alabama, Georgia, Louisiana, and Tennessee soon followed South Carolina’s lead and voted to dissolve their ties with the United States. 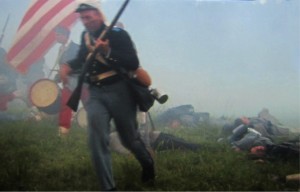 When confederate soldiers fired the first shots on Fort Sumter in April of 1861, President Lincoln, with only a small standing army at his disposal, put out a call to muster an initial 75,000 men. Records indicate that Belmont sent a total of 147 men to fight with the Union Army during the course of the Civil War. Town records seem to indicate that most entered as volunteers, for which the town paid over $17,000 in bounties. This sum (usually about $125.00 per man) was given to those who volunteered as a bonus in addition to their regular military pay. In some cases it proved to be a recruiting incentive, especially for new immigrants whose job prospects and incomes were low. At this time the practice of conscription was also in effect and considered perfectly proper to most. Every man between the age of 16 and 55 was required to register, and those who were not able or did not wish to fight were allowed to hire a substitute.

The Civil War has received renewed attention over the past several years as our nation commemorates the sesquicentennial anniversary of those who fought bravely between 1861 and 1865. Both the March and June Newsletters published by the Belmont Historical Society in 2013 contained a wealth of information about local residents who participated in the battles. The articles included background information, first-hand accounts from the field, historic photos, and personal stories. In addition to those volumes, a series of posters depicting specific aspects of the Belmont-related material were on display in the Claflin Room. More recently the posters were included in the 2013 Holiday Tour of the William Flagg Homer at 661 Pleasant Street that featured a Civil War-themed Christmas. 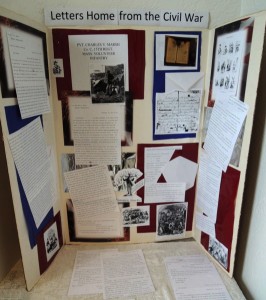 A poster board titled “Letters Home from the Civil War” was of great interest in these exhibits. This display featured handwritten correspondence from the Historical Society’s archival collection. The author was 27 year old Charles Viles Marsh who was a private in the 15th Massachusetts Infantry Volunteer Regiment, Company C. His communications with his family back home in Belmont provides interesting eyewitness descriptions of the events that took place during the period between 1862 and 1864. The letters he wrote while far away from the comforts of home in the newly incorporated small town of Belmont capture the uncertainty and bravery that characterize this young man’s experiences as he embraces the ideals and ideas that he must serve to protect and defend the Union. Charles Marsh’s letters home have been transcribed and are shared on this website with supplemental background information that is offered to place historic events in context. Read his first letter home to his sister after he arrived in camp in the late summer of 1862. Read his letter two months later after he had survived the bloodiest battle of the war. The original letters and supplemental information are available in the Belmont Historical Society’s archival collection in the Claflin Room.